They’ve got an impressive amount of fiber.

Need calcium? Chia’s got it!

What Are Chia Seeds?

Chia seeds may seem like a modern fad, but their use actually goes back hundreds of years. Many Native American tribes, such as the Chumash, Maidu, and Costanoan, ate chia seeds as a significant part of their diet, and the seed was grown alongside corn in some places in Mexico, according to the United States Department of Agriculture Natural 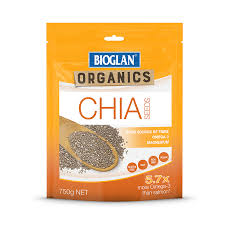 But back then, these seeds weren’t staples in breakfast bowls and smoothies. Some people mixed them with flour to make tortillas, while others combined them with water and cooked them to make a porridge or soup. The seeds even had medicinal uses, and were used to treat a range of ailments, from fever to inflammation, the USDA notes. (1)

Over time, this ancient seed grew in popularity — though not first as a popular superfood. Indeed, as the New York Times reports, chia seeds first resurfaced in our homes as a novelty item — in the form of Chia Pets, which were widely popular a few decades ago.

Since then, chia has experienced another little renaissance, and now finds its way into our puddings, smoothies, breads, and much more.

What Are the Nutrition Facts of Chia Seeds?

Why are these tiny seeds so popular now? A key reason may be their reputation as nutritional powerhouses: One tablespoon (tbsp) of chia seeds contains about 69 calories, as well as, roughly:

The seeds also contain a number of vitamins and minerals. One tbsp offers: (4) 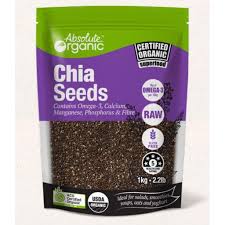 As reported by the Academy of Nutrition and Dietetics, chia seeds come from Salvia hispanica, a desert plant that is part of the mint family. 5)

What Are the Possible Health Benefits of Chia Seeds?

These seeds are definitely packed with nutrients, and are listed by the U.S. Department of Agriculture’s MyPlate guidelines as a great source of protein. But what does this actually mean for your health?

It turns out, many things. A review in the Journal of Food Science and Technology notes that these seeds are a fantastic source of omega-3 fatty acids, as well as a source of a number of different antioxidants, such as chlorogenic acid, caffeic acid, myricetin, quercetin, and kaempferol, which may have heart-healthy, antiaging, and anticarcinogenic benefits. (6) 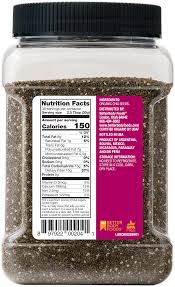 The fiber in these seeds can aid the digestive system — and the review further noted that previous studies have found chia seeds can benefit people managing various diseases and health issues, including type 2 diabetes, high blood pressure (hypertension), and depression. (6)

Importantly, these seeds have high amounts of linoleic and alpha-linolenic (ALA) fatty acids, as the Harvard T.H. Chan School of Public Health notes. (8) These acids can be used to create other omega-3 fatty acids, docosahexaenoic acid (DHA) and eicosapentaenoic acid (EPA), which the body can more readily use. (9)

Can Adding Chia Seeds to Your Diet Help With Weight Loss?

Because chia seeds do have lots of fiber, they promote a feeling of fullness, and so might prevent the overeating that contributes to weight gain.

These seeds are healthy for a variety of reasons, and contain fiber, protein, calcium, phosphorus, and omega-3s. (8) Some animal studies even show that they increase the feeling of fullness and help with weight loss, but so far, literature reviews and studies on humans haven’t backed up these claims. (8) 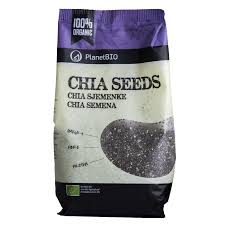 Are There Any Potential Health Risks of Eating Chia Seeds?

Chia seeds pack a lot of nutrition, but you will want to keep portion size in mind if you’re looking to lose or maintain weight. Of course, this rule is true of any food, and most people won’t have trouble with this if they consider the typical 1 tbsp portion size for these seeds, which contains only 69 calories. (3)

That said, another potential health risk of eating these seeds in excess is digestive issues due to their fiber content. If your body isn’t used to regular fiber intake, be sure to increase the amount you eat gradually and drink plenty of water. 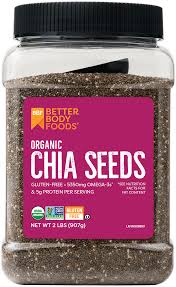 They don’t have much flavor on their own, so they pair well with a number of dishes, and can be added to things like: (8)

1. How much chia should I consume?

There are no hard-and-fast guidelines on how many chia seeds you should eat daily. But some doctors and institutions offer reasonable recommendations, such as Columbia University, which suggests eating 20 g (or a bit under 2 tbsp) of chia twice per day. (12) Naturally, this varies depending on factors such as your age, sex, and weight. Because they’re so dense in fiber, just remember to increase the amount you eat gradually and drink plenty of water.

2. Are chia seeds safe for all people?

Use caution before eating them if you have any food allergies, such as to sesame or mustard seeds — check with your doctor first before adding chia seeds to your diet. Also, if you are on high blood pressure medication or blood thinners, or are pregnant or breastfeeding, talk to your doctor before adding chia seeds to your diet. Finally, Columbia University notes that ALA, which is found in large doses in chia seeds, may increase your risk of prostate cancer. (12)

You can buy chia seeds at many local grocery stores — check near the produce or any packaged “superfood” sections, or you may find them in the baking aisle.

You can buy chia seeds ground or whole, and they last about four to five years in your pantry. (8) 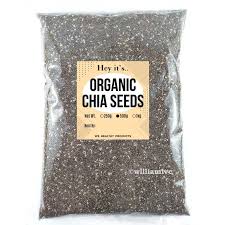 4. Is there more than one kind of chia seed?

Yes! Chia seeds can come in black or white varieties, though their nutritional profile is the same regardless of which color you go with. (8)